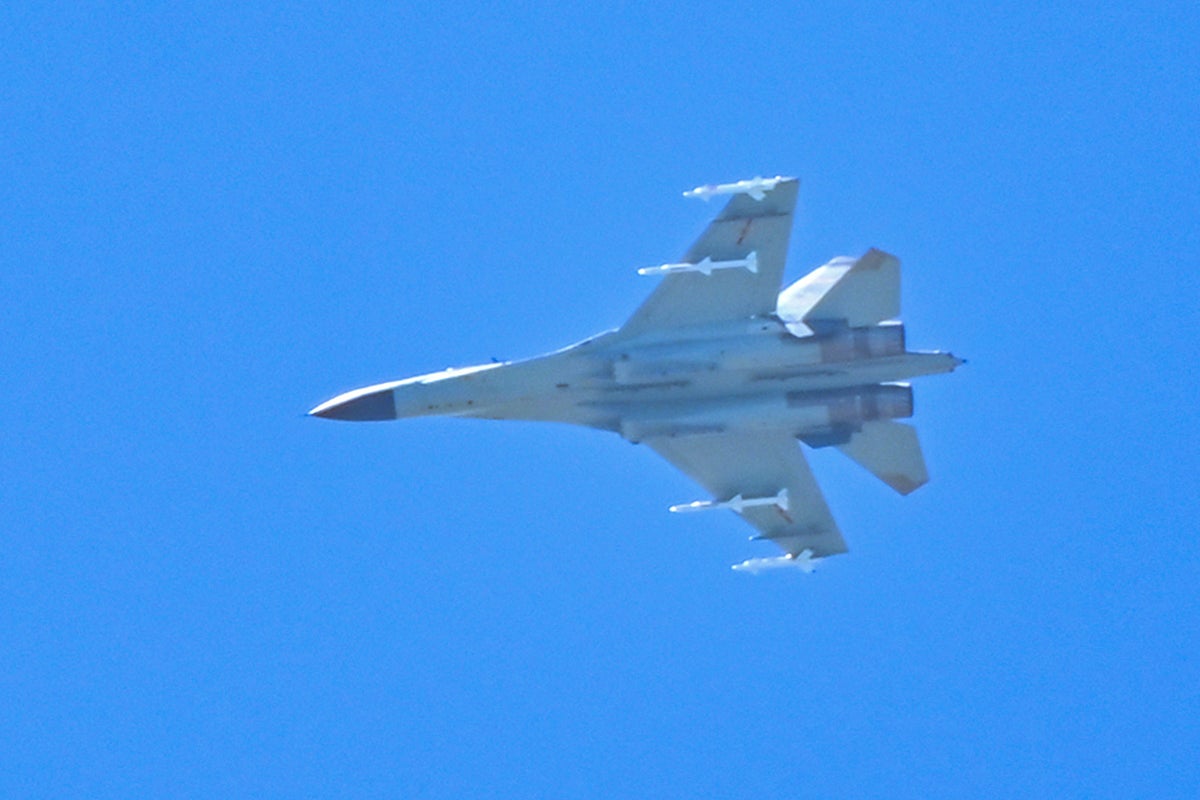 A top Taiwanese defense ministry official was found dead on Saturday as the self-governing territory accused China of carrying out a “simulated attack” with the country’s warships and planes conducting missions in the Taiwan Strait.

Ou Yang Li-hsing, the deputy head of the Taiwan defense ministry’s research and development unit, died from a heart attack on Saturday in his hotel room, reported state media.

The room had no signs of ‘intrusion’ and his family had a history of heart disease, said the official Central News Agency.

Meanwhile, the defense ministry tweeted on Saturday that multiple Chinese craft conducted missions in the Taiwan Strait, with some crossing the median line which is an unofficial buffer separating the two sides in what it sees as a “possible simulated attack.”

The developments come as Beijing continues its military offensive as it fired multiple ballistic missiles in the direction of Taiwan, four of which flew directly over the capital city Taipei.

US secretary of state Antony Blinken slammed China’s military exercises, saying there was no justification for Beijing’s “extreme disproportionate and escalatory” response.

The statement came as Ms Pelosi reasserted America’s support for Taiwan, saying that China will not be able to isolate the island by preventing US officials from traveling there.

Taiwan’s armed forces have reportedly issued an alert and dispatched air and naval patrols around the island.

The island has activated land-based missile systems in response to the situation, according to Taiwan’s Ministry of National Defense.

The ministry tweeted that the island’s armed forces are watching over the surrounding waters in response to the recent military drills.

Ou Yang Li-hsing, the deputy head of Taiwan defense ministry’s research and development unit who was found dead on Saturday morning in a hotel room, had succumbed to a heart attack, government-controlled Central News Agency reported.

The 57-year-old, who had assumed the post early this year to supervise missile production projects, died of a heart attack and the hotel room showed no signs of “intrusion,” the CNA report noted.

He had a cardiac stent and his family reportedly had a history of heart disease.

Taiwan’s defense ministry has said multiple Chinese warships and planes conducted missions in the Taiwan Strait in what seemed to be practice for an attack on the island.

Some of the ships and planes, according to officials, crossed the median line – an unofficial buffer separating the two sides.

These movements, Taiwan’s military says were part of a simulation attack on the main Taiwan island.

Speaking at a rally in Wisconsin, former US president Donald Trump slammed Nancy Pelosi over her recent Taiwan visit.

“What was she doing in Taiwan? She was China’s dream,” Mr Trump said.

“She gave them an excuse. They’ve been looking for that excuse,” he said of Ms Pelosi’s visit to the self-governing territory.

Authorities are looking into the cause of death, according to CNA.

Mr Ou Yang, who assumed the post early this year to supervise production missile projects at the National Chung-Shan Institute of Science and Technology, was found dead in a hotel room in southern Taiwan.

The military-owned body has been working to more than double its yearly production of missiles to close to 500 this year to boost the Island territory’s combat power amid its growing tensions with China.

Jo Yong Sam, a spokesman for the North Korean Foreign Ministry, has slammed US House Speaker Nancy Pelosi for visiting Taiwan, calling her “the worst destroyer of international peace and stability” and accusing her of inciting anti-North Korea sentiment.

“Pelosi, speaker of the House of Representatives of the US, who had come under a volley of due criticism from China for destroying regional peace and stability by visiting Taiwan, stirred up the atmosphere of confrontation with the Democratic People’s Republic of Korea during her visit. to south Korea,” Jo said in a statement carried by state media.

“It would be a fatal mistake for her to think that she can go scot-free in the Korean Peninsula. The US will have to pay dearly for all the sources of trouble spawned by her wherever she went,” he warned.

Canada has told China to stop missile launches toward Taiwan after US House speaker Nancy Pelosi’s contentious visit to the self-governing territory.

“Canada is deeply concerned by the missiles launched by the People’s Republic of China towards Taiwan and into Japan’s exclusive economic zone,” Canada’s foreign minister Melanie Joly tweeted on Saturday, adding that China’s military action “threatens regional stability and security”.

“We strongly urge the PRC to halt its coercive military and economic actions,” she said.

Hua Chunying, a spokesperson for China’s military, accused the US of participating in “foreign aggression.”

“China had historically been a victim of foreign aggression. Today, the US still grossly interferes in China’s internal affairs and attempts to undermine China’s sovereignty and security from time to time,” she said on Twitter. “If the US is indeed a responsible country, it should have prevented #Pelosi’s irresponsible aggression early on and it should have removed the many military vessels and aircraft it has deployed right at China’s doorstep.”

She said the US was using “salami tactics” — an accusation that European analysts have lobbed at China in the past — to “hollow out the One China principle.”

The foreign minister of Taiwan Joseph Wu has tweeted that many of the Chinese planes and vessels “crossed the median line of the strait” on Friday “to simulate attacks”.

“This dangerous escalation of the military threat is wrecking peace & stability in the region and must be condemned”, he wrote on the account of the Ministry of Foreign Affairs.

The Taiwan Defense Ministry tweeted on Friday that “the recent coercion from PRC’s drills around us aimed to change the status quo of Taiwan Strait, violated our sovereignty, and caused tension in the Indo-Pacific region. #ROCArmedForces seek no escalation, but we succumb to no challenges and respond with reason”.

Earlier on Friday, the ministry announced that the Chinese army “dispatched 68 aircraft and 13 vessels until 17:00 (UTC+8) for the activities around Taiwan Strait, part of which had crossed the median line and jeopardized the status quo of the strait. ”.

“We condemn such action that disturbed our surrounding airspace and waters and continue to ensure our democracy and freedom free from threats”, the ministry added.

72% of institutional traders are crypto-skeptical this year: JPMorgan