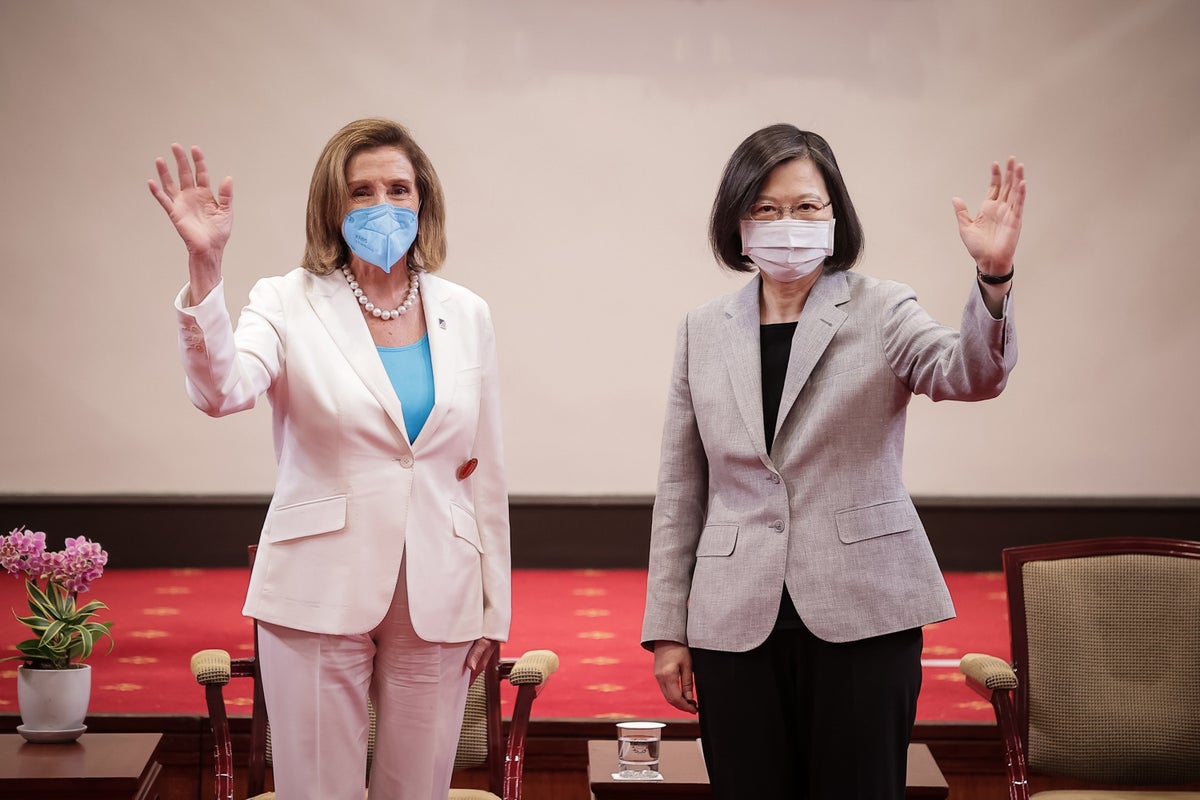 China started its largest-ever military exercises around Taiwan today after Nancy Pelosi’s controversial visit to the island nation. Taiwan called the military drills around the island “illegitimate and irresponsible”.

US House speaker Pelosi left Taiwan on a US Air Force jet on last evening, concluding a historic and high-stakes visit that drew a slew of angry responses from China. Her next stop is South Korea.

Taiwan said on Thursday that it had fired flares to drive away an unidentified aircraft — probably drones — that had flown in on Wednesday night above the area of ​​its Kinmen islands.

Beijing warned of “punishing” those who offend it, while Chinese state media called the speaker’s trip an “opening salvo of war”.

Meanwhile, Russia backed China’s assertion that the trip was a deliberate attempt by Washington to irritate Beijing, while a Kremlin spokesperson said that the tension created from Ms Pelosi’s trip to Taiwan “should not be underestimated”.

A spokesperson of the Chinese Mission to the EU criticized the statement of the G7 foreign ministers and the EU high representative over China’s Taiwan region, according to the Global Times.

The Chinese Mission to the EU called it “ugly” and “shameless” and said that “it is reminiscent of the ‘Eight-Power Allied Forces’ that invaded China a hundred years ago.”

“What is ugly? What is shameless? The statement of the G7 foreign ministers and EU High Representative for Foreign Affairs and Security Policy is a living specimen of all that…They collude, do evil and call white black,” said the spokesperson on Thursday, Global Times reported.

The G7 foreign ministers and the EU high representative said in a joint statement yesterday that they are concerned by the “threatening actions by China” across the Taiwan Straits, which “risk unnecessary escalation.”

After Taiwan, Pelosi in South Korea to meet political leaders

On Thursday, US House Speaker Nancy Pelosi met top South Korean political leaders — a day after she concluded her historic visit to Taiwan.

Ms Pelosi and other members of Congress flew to South Korea on Wednesday evening, as part of an Asian tour that included stops in Singapore and Malaysia. After South Korea, they will travel to Japan.

Before their talks, live TV footage showed Mr Kim and Ms Pelosi bumping elbows and posing for a photo in front of South Korean and US national flags.

SE Asia urges US, China to avoid provocation over Taiwan

The Association of Southeast Asian Nations is calling for calm in the Taiwan Strait.

The SE Asian nations have urged against any “provocative action” by China in the wake of Nancy Pelosi’s visit to Taiwan.

In a statement by the 10-nation group on Thursday, they said that they were concerned the situation could “destabilize the region and eventually could lead to miscalculation, serious confrontation, open conflicts and unpredictable consequences among major powers.”

Both US secretary of state Antony Blinken and Chinese foreign minister Wang Yi were taking part in the ongoing ASEAN meetings in Phnom Penh on Thursday and Friday.

Taiwan’s cabinet spokesman also condemned the drills and said that the websites of the defense ministry, the foreign ministry and the presidential office were attacked by hackers.

It was reported that as soon as Nancy Pelosi left the island yesterday, an unidentified aircraft flew above the area of ​​Taiwan’s outlying Kinmen islands near the mainland coast. Taiwan’s defense ministry said that they had to fire flares to drive it away.

“What Pelosi has done is definitely not a defense and maintenance of democracy, but a provocation and violation of China’s sovereignty and territorial integrity,” she said.

“Pelosi’s dangerous provocation is purely for personal political capital, which is an absolute ugly political farce,” she added. “China-US relations and regional peace and stability is suffering.”

The state-owned CCTV said that the military drills would end at 0400 GMT on Sunday.

The drills would include live firing on the waters and in the airspace surrounding Taiwan, it said.

Taiwan has deployed missile systems to track the movement of Chinese air force activities near the Median line, Reuters reported.

It was also reported that Taiwan’s navy chips are staying close to the median line to monitor Chinese navy activities.

Taiwan said on Thursday that it had fired flares to drive away an unidentified aircraft — probably drones — that had flown in on Wednesday night above the area of ​​its Kinmen islands.

China had warned Taiwan of the “consequences” of Nancy Pelosi’s visit and announced military drills in six locations surrounding Taiwan soon after she landed in Taipei on Tuesday night.

Major General Chang Zone-sung of the Army’s Kinmen Defense Command told Reuters that the Chinese drones came in a pair and flew into the Kinmen area twice on Wednesday night, at around 9pm and 10pm local time.

What you need to know about Pelosi, China, and Taiwan

House Speaker Nancy Pelosi’s visit to Taiwan, the highest-level trip by a US official in 25 years, has sparked a diplomatic crisis between the US and China.

Beijing warned the United States that it was “playing with fire” by allowing the speaker’s visit to take place, and even Joe Biden had cautioned against it.

So why is Ms Pelosi’s trip so controversial?

Here’s what you need to know.

Taiwan is at the center of a geopolitical struggle between Beijing and Washington.

US House speaker Nancy Pelosi wrapped up her highly-controversial, historic visit to Taiwan on Wednesday amid massive criticism from China.

Ms Pelosi is the first highest-ranking American official in 25 years to visit Taiwan despite strong warnings from China. In fact, China had openly criticized her visit with Chinese state-owned media calling the trip an “opening salvo of war”.

But she had said that she and other members of Congress were visiting Taiwan to show they “will not abandon their commitment” to the self-governing island.

Maroosha Muzaffar has the details.

China is trying to intimidate Taiwan by imposing trade resticctions, sending military jets near Taiwan and has summoned the American envoy in Beijing to lodge a stern protest against Ms Pelosi’s visit.

Man dies after being stabbed in Bristol park