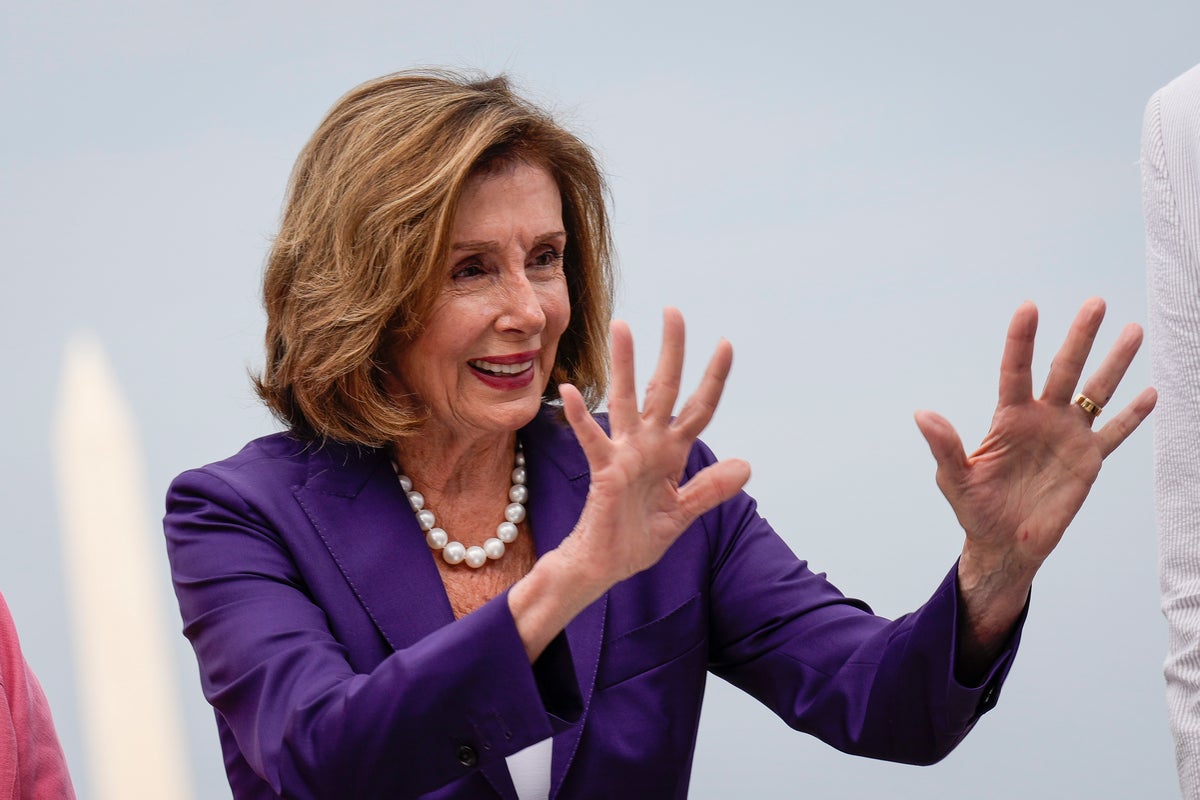 Tensions are high across the region ahead of House of Representatives speaker Nancy Pelosi’s expected visit to Taiwan on Tuesday, with Chinese warplanes flying close to the median line of the sensitive Taiwan Strait.

Chinese warships and aircraft “squeezed” the median line on Tuesday morning, an unusual move described by one Reuters source as “very provocative”.

Ms Pelosi arrived in Malaysia on Tuesday morning for the second leg of her Asia tour, and the US military plane carrying Ms Pelosi and the Congressional delegation has now left that country, reported the Associated Press, though there is still no confirmation of where the plane. is headed next.

Ms Pelosi left the US on Sunday and began her visit in Singapore. Her office has said she will also travel to South Korea and Japan.

The visit to Taiwan would be the most senior by a US politician since then-House speaker Newt Gingrich went there in 1997.

The US air force plane carrying speaker Nancy Pelosi and her delegation left from a Malaysian air force base on Tuesday, according to an official who spoke on condition of anonymity to the Associated Press.

Ms Pelosi and the delegation departed after a brief stopover that included a lunch meeting with prime minister Ismail Sabri Yaakob.

It is still unclear where she is headed from Malaysia, but local media in Taiwan reported that she would arrive on Tuesday night.

US should give up attempt to play Taiwan card, says China.

China has promised to take “strong and resolute measures” if US House speaker Nancy Pelosi goes ahead with her potential trip to Taiwan on Tuesday.

At a press briefing on Tuesday Chinese foreign ministry spokesperson Hua Chunying said if Ms Pelosi carries on down the “wrong path”, China will take “strong and resolute measures” to safeguard its sovereignty.

“The US should give up any attempt to play the Taiwan card,” she added.

Tensions were growing on Tuesday amid reports of a potential visit to Taiwan later today by US House of Representatives speaker Nancy Pelosi during her trip to Asia.

Ms Pelosi arrived in Malaysia this morning and has not yet confirmed the trip to Taiwan.

Flight tracking websites showed the US military plane she was traveling in left Malaysia a short while ago.

Read our recap of the situation here:

Tensions high across Asia as Pelosi poised for Taiwan visit

Asian shares fall amid concerns over Pelosi’s visit to Taiwan

Asian shares were mostly lower on Tuesday amid concerns about regional stability over a potential visit by US House speaker Nancy Pelosi to Taiwan.

“Risk sentiment took a hit following reports suggesting US House speaker Pelosi is to go ahead with her visit to Taiwan. Investors are likely to be looking for defensive positions as the geopolitical situation could escalate over the next few days,” said Anderson Alves of ActivTrades.

“No party wants a real war, but the risk of mishap or even aggressive war game escalation is real, which could always lead to a tactical mistake.”

Four US Navy warships, including an aircraft carrier, were positioned in waters east of Taiwan on “routine” deployments amid reports of House speaker Nancy Pelosi visiting Taipei.

The carrier USS Ronald Reagan had transited the South China Sea and was currently in the Philippines Sea, east of Taiwan and the Philippines and south of Japan, a US Navy official confirmed to Reuters on Tuesday.

The vessel is operating with a guided missile cruiser, USSR Antietam, and a destroyer, USSR Higgins.

“While they are able to respond to any eventuality, these are normal, routine deployments,” the official added.

The official said the amphibious assault ship USSR Tripoli was also in the area as part of a deployment to the region that started in early May from its home port of San Diego.

Pelosi expected to touchdown in Taiwan

House speaker Nancy Pelosi, who was in Malaysia on Tuesday morning, is expected to arrive in Taipei by tonight.

AFP has published this photo with a view of the airbase where Ms Pelosi is expected to arrive.

Chinese president Xi Jinping has urged the communist party to “win hearts and minds” of people in Hong Kong, Macao and Taiwan as part of a “national rejuvenation.”

“The united front … is an important assurance for (China’s Communist Party) to defeat the enemy, to govern and rejuvenate the country, and to rally all Chinese people both at home and abroad to realize national rejuvenation,” Mr Xi said at a Beijing conference on United Front Work, according to state-run news agency Xinhua.

Highlighting that “profound changes” unseen in a century were playing out globally, the Chinese president said, United Front efforts were “even more important.”

This should include efforts to “strike the right balance between commonality and diversity” at home and “win hearts and minds of people in Hong Kong, Macao and Taiwan as well as overseas Chinese,” he added.

US jet that flew Pelosi to Malaysia departs

It has not been established yet whether Ms Pelosi or her delegation were on the plane or not.

The speaker is expected to arrive in Taipei later on Tuesday.

After Singapore prime minister Lee Hsien Loong “highlighted the importance of stable US-China relations for regional peace and security” during talks with Nancy Pelosi on Monday, similar statements have also come in from other Asian neighbors.

The Philippines also urged the US and China to be “responsible actors” in the region.

“It is important for the US and China to ensure continuing communication to avoid any miscalculation and further escalation of tensions,” said foreign affairs spokesperson Teresita Daza.

China communicating with US over Pelosi’s expected Taiwan visit

China has been in communication with the US over House speaker Nancy Pelosi’s expected visit to Taiwan, Chinese foreign ministry spokesperson Hua Chunying said on Tuesday.

Ms Pelosi has not confirmed a trip to Taiwan yet.

Local media reports said that the speaker, who is now in Malaysia, will fly to Taipei on Tuesday night.

How to Become an Instagram Influencer | by how to create an ebook | February, 2023

PETER HITCHENS: Labour moans about crime. But it did the most to ruin the law-abiding world