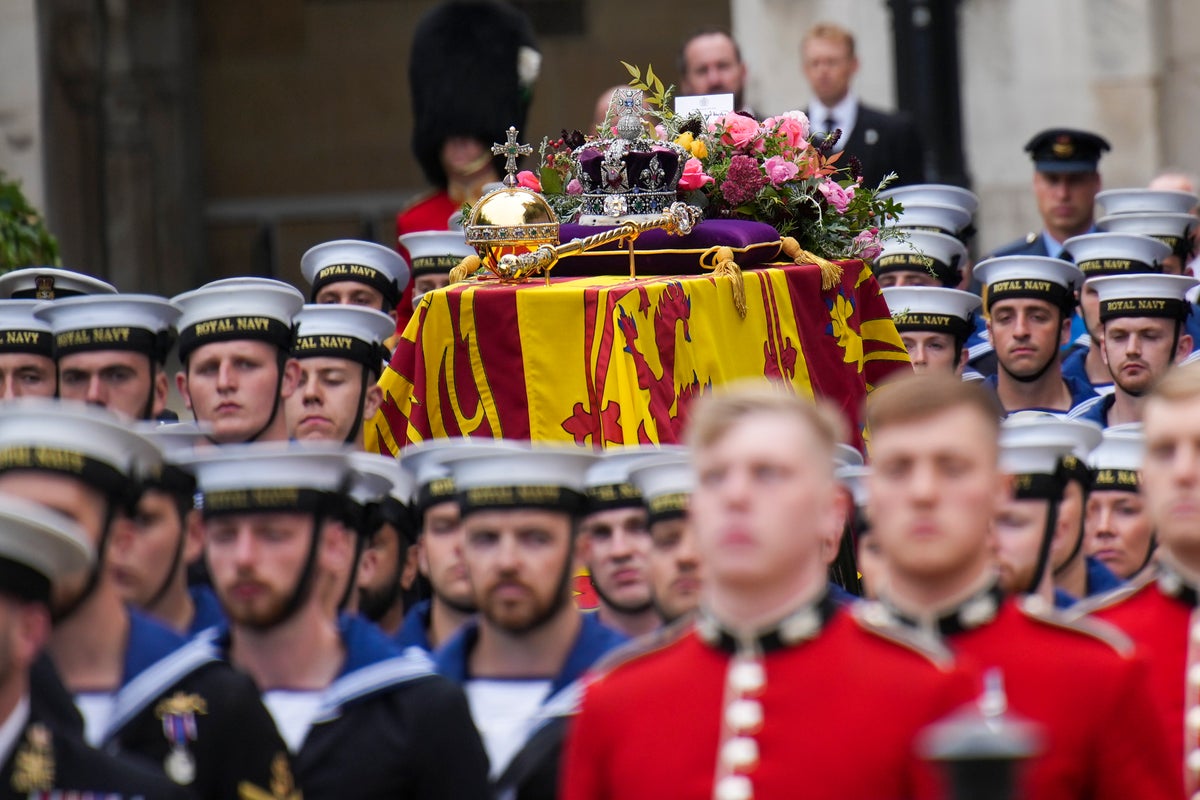 The new monarch was accompanied by his sons, Prince William and Prince Harry, and by other members of his family.

Some 2,000 mourners – including world leaders like US president Joe Biden – took their seats earlier in the 1,269-year-old church ahead of the funeral.

Ahead of her funeral, the longest-reigning monarch’s coffin was lying-in-state from Wednesday evening.

The state funeral on Monday is the first of its kind since that of Winston Churchill in 1965, and will take the form of an elaborate ceremony, after which Her Majesty’s coffin will be transported to Windsor Castle.

The Queen’s coffin has been carried into Westminster Abbey.

Here is footage of the moment that Liz Trussa arrived at Westminster Abbey.

The prime minister was among 2,000 people, including other politicians, world leaders, and the royal family, expected to attend the historic ceremony.

Liz Truss greeted by Archbishop of Westminster as she arrives for Queen’s funeral.

Phones stretched high in the air and people towered over each other, standing in window panes and sitting on walls to catch a glimpse of the procession.

One woman whispered ‘there she is’ as the Queen was carried to Westminster Abbey.

The Queen’s funeral is being held at Westminster Abbey.

My colleague Harry Cockburn has more details on the Sussex’s arrival at Westminster:

The Duke and Duchess of Sussex have arrived for the funeral procession to Westminster Abbey ahead of the Queen’s State funeral.

Queen’s children and grandchildren follow her coffin to Westminster Abbey

The Queen’s children can be seen following closely behind their mother’s coffin as it is taken to Westminster Hall.

Princes William and Harry can be seen side-by-side, just a few steps behind their father, aunt and uncles.

The procession has now begun.

Here is another view of the Queen’s coffin as it was placed onto the gun carriage which will take it to Westminster Abbey.

The Queen’s coffin is being taken from Westminster Hallsd, draped in the Royal Standard and bearing the Imperial State Crown, orb and sceptre.

It has been placed onto the 123-year-old gun carriage which will take it to Westminster Abbey, which was brought into New Palace Yard by 98 Royal Navy sailors.

King Charles and senior royals arrive at Westminster Hall ahead of procession.

King Charles and members of the royal family have arrived at the Palace of Westminster after driving the short distance from Buckingham Palace.

Charles waved at well-wishers from the back seat of his vehicle, which was one of four cars to arrive at Westminster Hall, where they were greeted by Commons speaker Sir Lindsay Hoyle.

There were cheers from the crowds as the cars drove past, with the streets packed full of people trying to get a glimpse at the King, who will soon walk behind his mother’s coffin as it is taken in a procession to Westminster Abbey.

Queen’s coffin to be moved shortly from Westminster Hall

In a few minutes, the Queen’s coffin will be lifted from the catafalque where it has stood in Westminster Hall by pall-bearers of the 1st Battalion Grenadier Guards, of which the Queen was company commander.

It will be draped with the Royal Standard and carrying the imperial state crown, orb and sceptre.

Her Majesty will then be moved from Westminster Hall to Westminster Abbey at 10.44am on Monday for the funeral service.

The route to Westminster Abbey, which will be lined by the Royal Navy and Royal Marines, will go from Parliament Square to Broad Sanctuary and the Sanctuary.