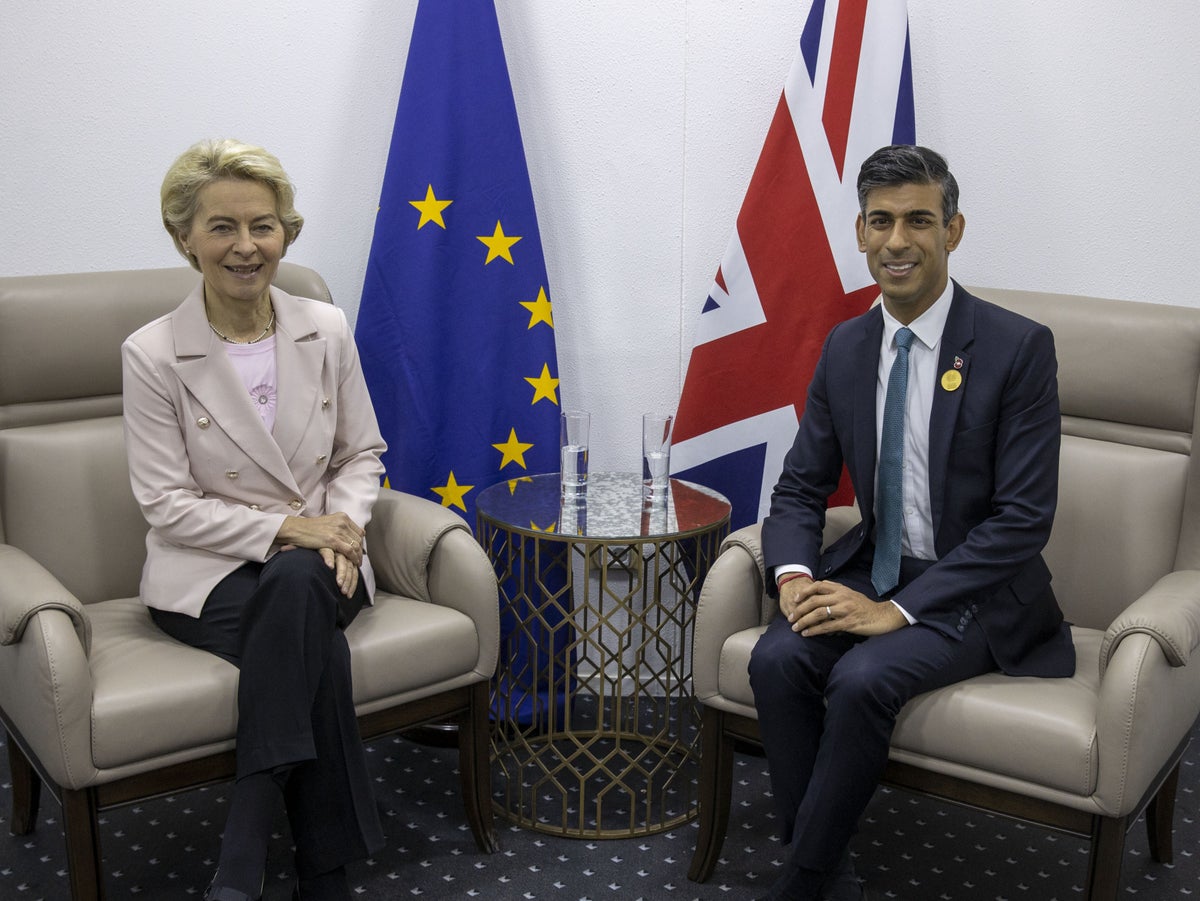 Sign up to our free Brexit and beyond email for the latest headlines on what Brexit is meaning for the UK.

Sign up to our Brexit email for the latest insight

Rishi Sunak should “revisit” the Brexit trade deal already agreed with the EU as part of an effort to forge closer economic ties with the bloc, the Tony Blair Institute for Global Change has said.

The think tank said it was time to consider ways to improve on the trade and cooperation agreement (TCA) signed by Boris Johnson, which is due for review at the end of 2025.

It comes as new analysis revealed that UK export growth has fallen well behind that of other major economies, including Germany and France, despite claims by the Conservative government that Brexit would boost British business abroad.

A report by the former Labor prime minister’s institute said there was a growing public appetite for closer links with Brussels to ease Britain’s “economic pain”, setting out a three-point plan to “fix” the current Brexit arrangements.

The think tank said Mr Sunak should rapidly forge a UK-wide agreement with the EU on food safety regulations in order to end the continuing row over the Northern Ireland protocol. The government should also consider aligning more widely with parts of the EU single market for goods on a voluntary basis to help restore smooth trade, the institute said.

More radically, the report urged ministers to launch a consultation with businesses on “revisiting” the existing TCA in a bid to forge a long-term deal with the EU that reduces barriers in goods, services and digital trade.

It follows a major row within the Conservative Party over a report that claimed that the government was considering trying to move towards closer, “Swiss-style” arrangements with the EU in order to gain single-market access.

Mr Sunak and his chancellor Jeremy Hunt have dismissed the idea of ​​any regulatory alignment with Brussels, or any return to freedom of movement, in exchange for single market access.

But Brexiteers on the Tory back benches remain suspicious after Mr Hunt failed to deny he was the source of the claims about a “Swiss-style” deal. A leading member of the European Research Group told The Independent they would be watching for any “softening” on Brexit after the “rather worrying” episode.

The furore comes as polling shows support for Brexit hitting an all-time low. “Most of the British public recognize that Brexit in its current form isn’t working for anyone,” said Anton Spisak, the author of the report and a senior fellow at the Tony Blair Institute.

He said “political space” had recently opened up for the first time since the divisive 2016 Brexit referendum to discuss “not only Brexit’s consequences but what improvements are necessary to the future relationship with the EU”.

Mr Spisak added: “The current government should take a pragmatic approach to fixing Brexit … Failing that, it will be incumbent on the next government to pick up the pieces and deliver tangible solutions to the problems arising from Brexit.”

However, Sir Keir Starmer vowed that a Labor government would not cross the “red line” of bringing back freedom of movement with the EU, as he once more ruled out a Swiss-style deal that would allow single market access.

In an apparent attempt to outflank the Tories on Brexit, the Labor leader told The Mail on Sunday that “ripping up the Brexit deal would lead to years more wrangling”, accusing allies of Mr Sunak of wanting to renegotiate the agreement.

Labor’s Lisa Nandy said on Sunday that she had “always believed in freedom of movement” for EU citizens coming to the UK, “but only if it’s allied to a very strong investment in the skills and the opportunities for young people here in Britain”.

Asked if she was comfortable with Labor’s move away from a commitment to freedom of movement, the shadow cabinet member told Radio Times that she did not see “any route” to a new deal with the EU on immigration controls.

New figures collated by the House of Commons Library show that UK trade exports grew just 24.4 per cent between 2010 and 2021, the lowest rate of growth among G7 countries apart from Japan. The EU averaged export growth of 35.5 per cent during the same period.

Labor accused ministers of a “consistent failure to champion exports” and said that the Brexit trade deal needed to be reformed to reduce red tape, rather than renegotiated.

It came as Labor said that the latest Department for International Trade figures show that the post-Brexit deal struck with Japan in 2020 by the then trade secretary Liz Truss was a failure.

British exports to the country declined from £12.3bn to £11.9bn in the year ending in June 2022. “Falling trade with Japan is irrefutable evidence that ministers are not delivering for UK exporters,” said Nick Thomas-Symonds, the shadow trade secretary. .

Why is the crypto market down today?

February strikes: All the UK dates confirmed for 2023